The drive for a paperless NHS has been a hot topic for a while now, but only recently it has truly sparked my attention. I read this article on BBC Health just today and I was really able to relate to it following the experiences I have gained through my work experience and volunteering. 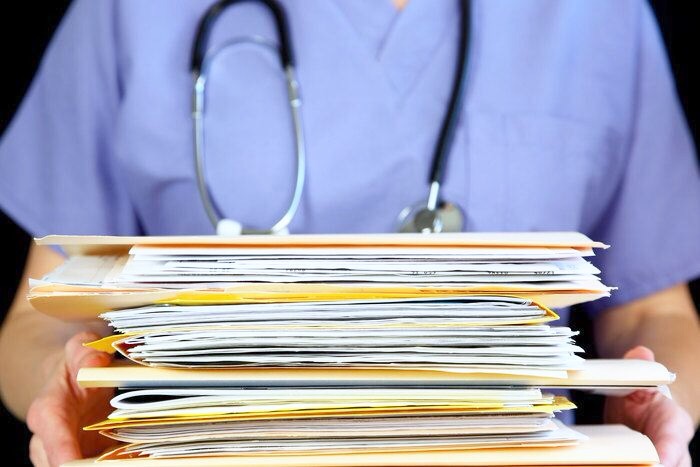 When I first started volunteering at the Urgent Care Centre I was quite impressed with the systems which were available in order to track where a patient is, in order to ensure doctors and nurses are safe as well as ensure that waiting times for patients are controlled. But now, after volunteering there for 3 months, I have noticed that the majority of a doctor’s time is consumed by filling out paperwork. Some doctors write up the notes during the consultation, which makes the consultation quite slow moving as every detail and to be recorded. I do appreciate the significance of recording notes and information of a patient’s care, however, I have always pondered on whether there could be a more efficient and time-effective way to do this. There are other doctors who seem to have adopted the method of speaking to a patient for a few minutes and then leaving the room in order to write up the notes. Either way, the majority of the time on the ward is spent writing the notes, stamping pieces of paper, printing and attaching relevant details of a patient’s care. Every week, when I visit the UCC, each doctor is on average only able to see to approximately 2 patients over the three hour period that I am there for. Quite a lot of the conditions and issues patients come with aren’t that complex and the actual condition doesn’t require much time to diagnose, so it would definitely be worthwhile if the paper aspect of it could be speeded up.

As well this problem being something which I myself have observed, many of the doctors and nurses seem to also be endlessly complaining about it. I have discussed it with a few of the staff and the doctors have told me that the notes are very useful as they regularly use a patient’s previous notes to help them come to a possible diagnosis and build a good history. This is clearly very important as I have also been able to directly see how relevant patient history is in providing clues for the issues patients come with in this setting. However, they have also said that some of the paperwork which they are being required to fill in is a “bit silly and pointless”. Many of them have also described the level of paperwork as “frustrating” and expressed that they’d much rather spend that time with another patient, which is something that I have been concerned about.

Now reflecting on this issue, I am able to recognise that this was something which I also saw during my work experience on the Respiratory Wards. For part of my time there, I shadowed a nurse which provided me with a great perspective of their role alongside the doctors. The nurse was visiting every ward and checking that the relevant notes had been completed by the relevant people. This was actually quite a time consuming process, considering how much easier it could be if she was simply able to rifle through a few entries on an online database. She was also signing each one as she said that she must show that she’s been checking the notes and completing them. I really believe that this administrative side to Medicine could be modernised a great deal in order to truly improve the care and treatment which is provided by health professionals.

One of the really interesting ideas mentioned in the article is the one regarding online prescription and GP services. This could definitely be very useful and I am able to appreciate this from my time spent at a GP surgery. I carried out my work experience at the General Practice in December so there was a lot of people requiring prescriptions. The procedure was for the prescription to be printed after either the doctor, pharmacists or administration staff authorising it and then it being sent back to the doctor for him to sign each one. Every hour the doctor was receiving a new pile of prescriptions which needed to be signed and this was difficult for him to complete alongside the long list of patients which were booked in to see him. Many patients were returning and asking for their prescriptions but it had not been signed yet which shows that the system was generally causing delays and wasn’t efficient enough. Once the prescriptions were returned they also had to be manually alphabetised. Any moment that I was in the office, the admin station staff were keen for me to give them a hand and sort out the prescriptions for them as they were already really busy with other tasks which deemed to be of a higher priority than alphabetising prescriptions. This change would undoubtedly allow GP surgeries to run more smoothly and definitely increase patient satisfaction.

Considering that the government has been planning on making these changes for a while now, I am also able to reflect on one of the ways which I saw change to the usual paperwork. I was able to see this during my work experience at the Fracture Clinic. The appointments there were much shorter than I had expected, with each one lasting about 2-3 minutes. The doctor would just check if the bone had healed or check to see if a patient had broken their bone and then send them to the plaster technician who would provide their limbs with the relevant support. There was a great number of patients to get through so the doctors dictated the notes for each consultation at the end. This merely took seconds! These notes were later typed up by somebody else, but it definitely allowed the doctors to see more patients and to see them much more quickly!

A paperless healthcare service seems ideal. It has proved to be successful in other institions and technology is undeniably the way forward. Most people are familiar with and rely on technology on a daily basis. We have all become so technology surrounded that for a lot of people physically coming to the GP to collect a prescription seems to completely disrupt our daily schedules. By integrating technology and healthcare, it’ll make the services provided by the NHS much more available and accessible to everyone. Nowadays, people believe in the power of technology, so it will without doubt have a positive effect on our healthcare system. It’ll reduce waiting times greatly, ensure much more focussed and personalised care of a patient with them being more involved in the treatment process and save money.

However, there are also some drawbacks with this innovation. The initial cost to sent up these systems seem immense, especially when the NHS has limited funding and issues regarding cost of services. Technology can be an amazing experience, but if something goes wrong when technology is involved in healthcare the consequences will be severe. The systems will have to be incredibly accurate, up to date and no room can be made for downtime. Cyber security is also another major concern. The risk of exposing data and private details will drastically increase when everything is recorded digitally. The cyber security of the systems will have to impenetratable as the NHS systems will contain highly confidential pieces of information. Become 100% no paper is quite a big change for the NHS and it will definitely require time for the staff to adjust to this. And of course, new unanticipated problems will arise when the system is actually put into action. Despite this, I do think that if these factors are overcome, the NHS could really benefit from scrapping paper and boarding on this digital technological train to a modern and more efficient future.